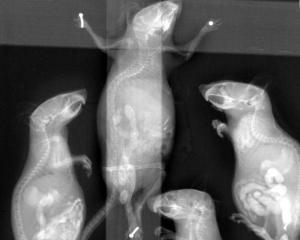 My boyfriend asked me a little while ago: “Does anything in art shock you anymore?”

It was just after I’d shown him Wim Delvoye’s ‘Stations of the Cross’ – a series of X-ray photographs where dead rats are posed as Jesus and his disciples. “I don’t know that it ever has,” I responded at the time.

The question has since been playing over and over in my head – does art have the capacity to shock me at all? I remember wondering something similar at this year’s Royal Academy Summer Exhibition as I stared at a painting of a White House banqueting hall filled with raw meat and again during some art show I can’t even remember the name of as I peered at what felt like the hundredth close up of a vulva. I think if you find penises, vaginas, bodily fluids, obscenities, challenges to religion, and wilful rudeness upsetting contemporary art would be like some kind of hideous minefield.

I have strong visceral reactions to art but the sudden violent disturbance of shock doesn’t seem to be one of them. Perhaps it’s because I know where I am in a gallery. I’ve seen enough that I tend not to be wrongfooted and I have enough of my own opinions that I tend not to be overwhelmed. I’m as used to turning the corner and finding ceramics in the shape of poo as I am turning that same corner to find something stunningly beautiful. That’s not to say I’m never surprised or appalled, but it’s not a deeply troubling sucker-punch to the psyche type of experience. Another point to make is that galleries tend to overanticipate offence and take steps to guard themselves by sticking up warning signs all over the place. If you went to see Sally Mann’s work at the Photographers’ Gallery before it closed for the year you could hardly have missed the signs explaining that a selection of photos of dead bodies in varying states of decay were just round the corner. Useful to prevent lawsuits and distraught children but not so good at retaining that element of surprise.

So back to the main question: have I ever been shocked by art?

Possibly, but just once. It was actually quite recently so I’m not sure why it didn’t spring to mind when my boyfriend first posed the question. Perhaps it’s because I’m still not entirely sure where the work falls on the ‘fine art’ scale. It was Gillian Wearing’s first feature film, Self Made and I watched it in the cinema, not in a gallery space. To my mind that might have been the important difference – I was watching something real unfold in a documentary framework.

The film follows a number of volunteers who responded to an advertisement in the paper asking for people to play themselves or someone else in a film. The volunteers each attend method acting classes and go on to perform a cinematic piece a few minutes long based around the character they want to play. The shocking moment comes during the final piece when Ash Akhtar, who has chosen to play himself, walks through town in silence – visibly stressed he clutches a carrier bag and turns a corner. Suddenly he stops in the middle of the road, drops the bag and turns, kicking a heavily pregnant woman incredibly hard in the stomach and walks away.

It peeped into someone’s brain, found something incredibly disturbing, stripped it to its bare bones and played it out for me wordlessly while I sat in a comfy red seat.