Petros Vrellis has attempted to visualise the flow of Starry Night by Vincent van Gogh (one of the most famous and loved paintings in the world) using openFrameworks. You can’t interact with the Vimeo video itself but if you watch from 1.40 onwards you can see how the interactivity works. 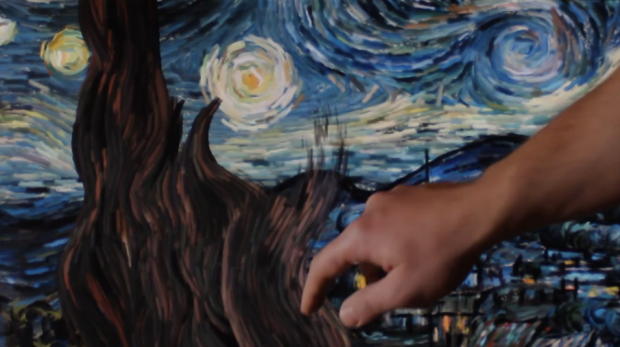 The good news is that following a large number of requests, Vrellos is working on a port to iPad and Android for the work so maybe you’ll have a Van Gogh literally at your finger tips soon.

One thing I would like to flag up though, is the comments on Vimeo, most of which are positive but a few of which take issue with the reworking of a classic artwork.

At their most coherent (and I’m paraphrasing here) they point out that Van Gogh had a peculiar talent for infusing a still image with motion through just his brushwork. So, in a way, animating the piece detracts from the original artist’s achievements and is perhaps unnecessary.

It’s a point I can understand because every additional brushstroke or sweeping gesture takes you just a little further from Van Gogh’s actual vision – if he’d wanted an extra branch, he’d have put one there etc etc. But to think like that is to misunderstand what this piece is doing. Vrellos has created a Van Gogh for you. It doesn’t matter that the piece is only the real thing for one frame in every few hundred because it’s not about being Van Gogh, it’s about translating that feeling of being able to plunge your fingers into a painted world into a reality.

← How cool is this Art Dispensing machine?
Roiling and billowing underwater inkscapes by Alberto Seveso →